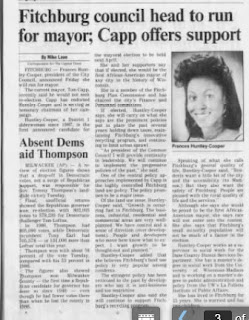 Fitchburg, Wisconsin — The scheme to rename City Hall after a one-term mayor who served in the early 1990s is looking a little sadder and sleazier two weeks after the private decision of Frances Huntley-Cooper and Michael Johnson was shared with the public, (Fitchburg Star. Wisconsin State Journal, Madison365).

The effort reportedly is the brainchild of Johnson, president and CEO of the Boys & Girls Clubs of Dane County, and Huntley-Cooper.


Johnson is not a resident of Fitchburg, and was not a Wisconsin resident when Huntley-Cooper served one term as mayor beginning in 1991.

Still no public comment from Frances Huntley-Cooper after numerous local news stories. She is assuming a royalist posture that she has no public duty to explain to Fitchburg residents why we must  pay public paens to her alleged greatness.

This monarchical silence is an interesting take from someone who wants the seat of local representative government and democracy named after her.

But we should not be surprised.

Our most sacred traditions and cherished democratic values mean nothing to Frances Huntley-Cooper.