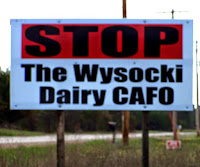 But Kreutzer is a resident of the town of Saratoga in central Wisconsin where a proposed industrialized, Concentrated Agricultural Feeding Operation (CAFO) or factory farm is sited, and the CAFO owners, the Wysocki corporation through its entities limiting their personal liability, are not keen on what Ms. Kreutzer wants.

The problem for Kreutzer is the CAFO owners, the Wood and Adams county citizens, and CAFO experts—know if the CAFO is to be built, it will pollute on a massive scale, befouling waters, land and the air with nitrates, phosphorous and ammonia from millions of gallons of liquidized manure produced annually.

The CAFO would be an environmental and economic disaster for a region gaining its footing after the decline of the paper mill industry.

In response, residents are citing the abundant natural resources of the area and promoting the recreation and tourism potential, efforts that would be imperiled by the massively polluting CAFO.

These are costs the CAFO owners are willing to inflict onto Wood and Adams county, negative externalities.

Wysocki already sucks up huge quantities of groundwater through its numerous high capacity water wells that make for an unsustainable future for the region.

These are also costs Wysocki is willing to see inflicted onto the community.

Wood County joins other Wisconsin counties and towns in enacting ordinances protecting groundwater from CAFOs within the past year, including Kewaunee County, Bayfield County, Ashland County and Oneida County.

But for James Wysocki it's mind over matter, Wysocki doesn't mind polluting and using up groundwater because area families don't matter.
Posted by MAL at 10:38:00 AM