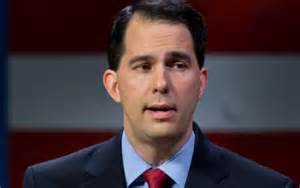 Scott Walker has been on one hell of a tax-payer financed political ride since 1993, happily raving against anything public except his own tax payer-funded salary, pension and health care .

But Walker and the Tea Party's hypocrisy and extremism won't play forever, no matter how many $millions the Koch brothers and other billionaires give this most unpopular politician in Wisconsin political history.

Scott Walker has now admitted he will deny Medicaid to 10,000s of Wisconsin citizens because this will bring him political advantages in the Republican Party.

And Walker's cynical calculation also compels him to deny an additional $340 million through 2021. So ideologically extreme has the Republican Party become, Walker's calculation is correct.

This effort by Walker and some 13 other Republican governors will cost $8.4 billion in federal funding in 2016 alone, denying health care to the working poor, some 3.6 million people.

Walker and other Republican governors, mostly in the deep south, say they are concerned Medicaid will not always be around as a federal health insurance program, an ironic position as the Republicans have accelerated their efforts to destroy the popular Medicaid, Medicare and Social Security social insurance. So their concern is fiscal.

But they also say they block Medicaid intended for the people because they "care" too much.

"I care for the people of this state too much to force them to live a life of dependence on the government," said Walker.

Walker has enjoyed his tax payer-funded salary, pension and health care since 1993, so he engages in a staggeringly blatant act of hypocrisy that will cost him only politically outside the GOP bubble.

But the working poor will pay with their health.

Addressing Republican policymakers like Walker, Ryan, McConnell and Boehner, J. P. Green notes, "They've got good health care and income security for themselves and their families, and they apparently believe that they can afford to indulge ideological extravagances with impunity. Not a one of them shows any indication that they give a damn about millions of American children having no access to health care, high unemployment or educational opportunities."

And as Paul Krugman points out with equal disgust:

...Medicaid rejectionism will deny health coverage to roughly 3.6 million Americans, with essentially all of the victims living near or below the poverty line. And since past experience shows that Medicaid expansion is associated with significant declines in mortality, this would mean a lot of avoidable deaths: about 19,000 a year, the [Rand] study estimated.
Just think about this for a minute. It's one thing when politicians refuse to spend money helping the poor and vulnerable; that's just business as usual. But here we have a case in which politicians are, in effect, spending large sums, in the form of rejected aid, not to help the poor but to hurt them.

And Walker, in a statement bizarre even by his deceitful standards, has said he wants to get back to the private sector and make some "real money," because his governor's salary of  $144,423/year does not satisfy his wife. That was in March 2012. We can assume his statement is no longer operative.
Posted by MAL at 8:59:00 AM