Hey Fundies, The World Is Not Undergoing Rapture May 21 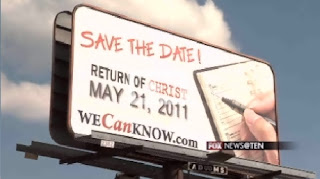 Update: Gays brought this on.

Pam Spaulding has been having some fun with the end-of-the-world-is-coming [Saturday] crowd.

Here's an update from Pam; though left unmentioned is whether that weird storm extending West from the Atlantic Ocean is the beginning of that horror-of-horrors process.

Note the Rapture Index is at near-record high of 182, indicating imminent End Times. But like many religious people, these guys who do the Rapture Index possess what Bertrand Russell used to term their "corners of madness" of significant girth.

So, let us join Pam, Lauri Lebo and many others in saying: Dear Lord, we mock thee.

From Lauri Lebo at Religion Dispatches:


I've been fielding a lot of questions from friends about the upcoming Rapture, which Christian doomsday prognosticator Harold Camping and his sad motley group of followers say will take place May 21. This is the day that true believers will be taken up to heaven, while everybody else -- Jews, Hindus, Muslims, Buddhists, atheists, agnostics and anyone who supports gay marriage or accepts evolution -- will be stuck here on Earth for another six months while war and pestilence rains down on us. Then, on Oct. 21, the world will end.

... ‘starting in the Pacific Rim at around the 6 p.m. local time hour, in each time zone, there will be a great earthquake, such as has never been in the history of the Earth,’ he says. The true Christian believers -- he hopes he's one of them -- will be ‘raptured’: They'll fly upward to heaven. And for the rest?

‘It's just the horror of horror stories,’ he says, ‘and on top of all that, there's no more salvation at that point. And then the Bible says it will be 153 days later that the entire universe and planet Earth will be destroyed forever.’