Five years ago today the street, Hector Jordan Way, was dedicated by the City of Aurora, Illinois

Officer, Detective and Supervising Special Agent Hector Jordan was honored by the City of Aurora and the Aurora Police Department by the naming of a street, Hector Jordan Way, at a ceremony attended by some 120 people.

Jordan was the first Hispanic cop in the Aurora Police Department and was an acclaimed undercover federal narcotics officer for the precursor of today 's Drug Enforcement Agency.

At six-foot, three inches, well-muscled, and intense, Hector "Bobby " Jordan cut an imposing figure on the Aurora police force in the 1950s.

But to the 1950s American mind, he had a serious issue --he was a Mexican-American, meaning the bigots didn't like him.

In fact, in 1955, Jordan faced down bigotry or those who tolerated bigotry, from the top of the police force. 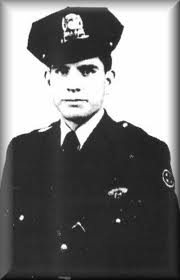 Before assuming duty, Jordan was told then by the powers that be how to behave and act around the "white" citizens he would encounter as the first Mexican-American officer on the force.

Jordan, angry and insulted, would have none of it, and suggested that the police find someone more "pliable," telling the powers that be to take him or leave him.

They took him. And Jordan went on to become the Aurora policeman of the year (1964), and rose to the top of his field in a career as an undercover federal narcotics agent (1965-1970) that officers and agents in this dangerous line of work have described as legendary.

"Hector taught me that policing is the noblest of callings. He believed that police officers were the knights in shining armor. That we were the modern-day Don Quixotes. That we were the 'guardians' that Plato talked about. That if we failed to do our job, the democracy would crumble. Hector Jordan believed these beliefs in the depths of his soul," said Michael Nila, Aurora Police Captain (ret.) and Jordan's nephew. [Full disclosure: I was named after Mike Nila, and Bobby Jordan is my uncle, I am proud to note.]

On September 20, 1970 outside a going-away party thrown for him as he was set to leave for Madrid, Spain to head an international narcotics team, Jordan at 38-years-old was viciously attacked by a gang of thugs who bludgeoned him to death [Jordan lapsed into a coma and died weeks later] simply because Jordan was a cop.

At least they didn't murder him for being a 'spic,' as Mexican-Americans were approvingly known by white society around Aurora those days, but Jordan pierced through that bigotry like an angry, Latin chain saw cutting up the veil of bigotry that separates us in his own unique way --human kindness, concern and humor, traits he brought with him to his position as a federal narcotics agent.

"Hector always had a way of getting things juiced up and firing up the [DEA] squad, sometimes somebody 's having a bad day, well, Hector would always be there to do something funny, taping up a desk, hiding car keys, taking someone out to lunch. He was there for everyone. Someone had a problem, or a financial problem, he would always loan him some bucks ... He was constantly the jokester, just having fun," said John Peoples, former partner and close friend of Hector Jordan, and retired DEA agent.

One time, Peoples recalled, an agent, John Wagner, had an assignment in Turkey, so the agents threw a going-away party and Jordan snuck in a live turkey to the party, a rather loud and aggressive animal when put in an office setting. Another time in downtown Chicago in the late 1960s, an edgy time for the police, at a bar full of some 40 cops, Jordan surreptitiously lit off a firecracker sounding just like gun shots, setting off a frenzied quest of checking for weapons and diving to the floor, to Jordan 's very private amusement.

Amusement was part of Jordan's gift, part of his love.

"The name Hector Jordan turned up on countless city commendations, including Policeman of the Year. Beyond the spotlight, he was often practicing off-duty social work -- lending a hand to everyone from the indigent families he met caught in the crossfire of crime and adversity, to the helpless wino on the street corner in need of a meal," reads a biography from the Aurora Hispanic Heritage Advisory Board.

The dedication event was jointly sponsored by the Aurora Hispanic Heritage Advisory Board and the Aurora Police Department.

The fact that an official organization as the Aurora Hispanic Heritage Advisory Board even exists today is a testament to the work of people like Jordan and those who carry on his tradition by stressing hard work and pride in the face of contemporary bigotry.

"Because of the pioneering achievements of people like Bobby Jordan in the 1950s and 1960s, a lot of Hispanics have an easier time achieving the American dream today. He is a true hero," said Joan Aguado-Ware, Jordan's niece, and an attorney in Milwaukee. "I worked in the Aurora-Chicago area in the Hispanic community after my first year of law school. I saw the racism that Hispanics have to overcome. Jordan overcame that racism, he challenged it head-on. I love hearing stories about Bobby Jordan because I think he is a role model for all Hispanics as today we face a threatening backlash."

Today the powers that be in Aurora, the chief of police, the mayor, sing Jordan's praises.

Unique Cop and Human Being

Jordan loved people, and during that period - late 1960s Chicago - when cops were not always loved back, Jordan never lost his faith and love for humanity, and his shared laughter with the people he vowed to protect with his life going undercover, hiding under cars, or playing the role of a doped-up druggie.

Reportedly, even some of the people he busted during his many headline-grabbing cases would brag about being busted by the legendary Bobby Jordan.

Recalled Jordan 's daughter Marsha at the Street dedication, an award-winning Chicago TV reporter-writer-producer: "I remember John Peoples [Jordan's partner] when I used to go visit my father at the federal building ...and after we would protest, that's what you did in the 1960s, ... and march over with the Conspiracy Eight [the infamous trial of the Chicago Eight/Seven] people to the federal building, and then I'd go up and see my dad. And he 'd say, 'How did it go down there? You guys getting anywhere? ' "

I also remember back then, John, you visited our home, and my father was so crazed by this particular record that I had by the Velvet Underground. He said, 'John, you gotta hear this, listen to this!' The song was I'm Waiting for My Man, $26 dollars in my hand, which was the price of a bag of heroin at the time. And John got so outraged: 'What are they, are you hearing this? What is their problem? ...We 're supposed to be underground. This is supposed to be a secret.' And my father just roared with laughter, and just fell over the floor. And the more irate you became, the more entertained he was. And that, as John said, was the great gift of his, his humor, the pleasure, the joy and the mischief that he elevated to masterful levels. As a cop and then as an agent, he was always about seizing the dare of the day with peril and purpose ... ."

You taught me to live like a man so it would empower my womanhood. So many of those quiet secrets we shared before the morning sun would hasten the hours of the ordinary. And the ordinary was not the Jordan way. Goethe said, 'He only earns his freedom and his life who takes them everyday by storm.'"

Listening to Jordan 's loved ones speak five years ago, as millions still march to acclaim their lives and their freedom to live as Americans, I cannot help but feel that the proud Mexican-American Jordan, were he alive, would look on smiling and ask: 'How 's that going? You guys getting anywhere?'
Posted by MAL at 9:17:00 AM