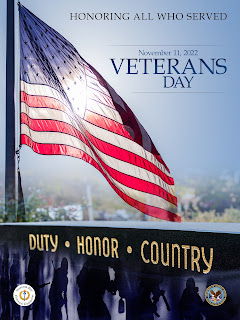 Honor the fallen, fight for the living

On Veterans Day, 2022, thank you to our veterans, patriotic men and women, ours.

What is it that drives so many bureaucrats, polar opposites of veterans whom we salute? Those who shit their days away at the V.A. Office of Inspector General, for example, defaming and persecuting our people, our veterans, whom we should be respecting.

Bob shot me over quotes for a review of We Gotta Get Out of This Place - The Soundtrack of the Vietnam War, (University of Massachusetts Press, 2015).

Walsh talked about killing, war, brotherhood, loyalty and music the way most of us talk about college and love.

"I was in Vietnam late, 101st Airborne, C 2/502nd Infantry, Sgt., September 71-Janaury 72, infantry patrolling in the I Corps area. So no music except when we came back to Camp Eagle.

"Then I was at Qui Nhon in II Corps, with a security company. So music was around all the time. AFRTS (Armed Forces Radio and Television Service) (Good Morning, Vietnam) actually played some good stuff. The music was of the time and the time of the music. As the Vietnam War dragged on music made some of the strongest and most effective statements. Politics and events informed the art.

"By the way, I was against the Vietnam war (it was stupid) but it was the only war we had, and I volunteered to go when I did not have to. It was fun, it was real, but it was not real fun."
---

I last heard from Bob Walsh a few weeks back and Walsh was advocating for another veteran, now dead, screwed over by another VA bureaucrat and the U.S. Dept of Justice in Texas.

Justin Perez-Gorda died in federal custody pending trial in Feb 2022. Perez-Gorda is a combat veteran wounded in the Afghanistan War. He suffered a debilitating spinal injury, diagnosed and treated by numerous medical professionals, after being blown up by an IED in Afghanistan on January 5, 2011.

When he arrived at a federal facility after ridiculous fraud charges, his wheel chair was taken from him and thrown in a dumpster. He was denied clean catheters associated with his spinal condition.

Perez-Gorda died of Sepsis after 108 days in pre-trial custody, having been denied any meaningful and competent medical care.

He was guilty of nothing but raising his right hand and swearing to defend the Constitution.

The United States government then went after his widow, Josephine Casandra Perez-Gorda.

This year's White House Proclamation on Veterans Day, 2022 addresses women like Josephine Casandra Perez-Gorda, reading in part: "In respect and recognition of the contributions our veterans and their families, caregivers, and survivors have made to the cause of peace and freedom around the world, the Congress has provided (5 U.S.C. 6103(a)) that November 11 of each year shall be set aside as a legal public holiday to honor our Nation’s veterans."

This is no longer the case as the United States government targets not just veterans, but also caregivers.

Josephine Casandra Perez-Gorda elected not to testify at her trial. She was scared, angry and alone. The VA and DOJ said she is guilty of "overstating" the very spinal injury that led to her husband's death.

Said Bob Walsh, "In VA benefits fraud cases I am firmly convinced that it is essential for the defendant to testify. After all the evidence is in and as the last witness."

"The facts, medical, and expert evidence and testimony in this case were all overwhelming and in her favor. But the defendant failed to close the deal with the jury," concluded Walsh.

Josephine Casandra Perez-Gorda's (Josie) sentencing is scheduled for Dec. 20. Her Husband is dead, dishonored by lies, and she faces federal prison.

This prosecution was premature as the defendants were not afforded the administrative due process mandated by 38 CFR 42.1 by the VA, which is supposed to conduct a proper criminal investigation, and which would cleared both the husband and wife.

The VA Office of Inspector General provided their standard misleading and incomplete testimony to the federal grand jury. The local U.S. Attorney's office is often more than willing to carry out the bad work of VA bureaucrats.

The widow, Josie, of Justin Perez-Gorda is now branded as a fraud and convicted felon.

Just another family destroyed by unlawful and shocking conduct of the VA Office of Inspector General.

Since 1986 over 5,000 veterans and their families have suffered similar abuse, Bob Walsh said.

Happy Veterans Day, and to far too many: So sorry you were fucked over by the very country you defended.

Madness. A motion is pending before the Court, concluding: "The trial evidence actually showed that Josie believed that each of her statements were true at that time and place of the utterance; that Josie was reacting as a spouse/caregiver to Justin’s ongoing pain, permanent TBI mental condition, PTSD mental condition, and schizophrenia in each instance; and that Josie largely repeated words she had read in a VA decision or heard a doctor say."

The Dec. 20 sentencing hearing is before the United States District Court for the Western District of Texas, San Antonio Division, United States of America.

Below is a reproduction of the motion for judicial acquittal in this case that is only now drawing national interest among the veterans' bar and veterans' advocates.

Motion for Judgement of Acquittal, Pursuant to Rule 29

DEFENDANT’S MOTION FOR JUDGMENT OF ACQUITTAL
PURSUANT TO RULE 29

COMES NOW defendant Josephine Perez-Gorda by and through her undersigned counsel, filing this motion for judgment of acquittal pursuant to Rule 29(c) and would show the Court as follows: