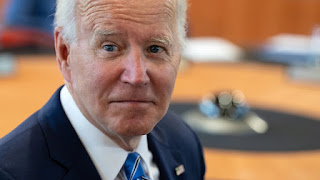 Update: See also Kavanagh, CounterPunch: "The Democratic Party knows exactly what it’s doing when it repeatedly supports and promotes anti-abortion-rights candidates against abortion-rights supporters—like Tim Kaine in 2016, Henry Cuellar this year, and its current leader, Joe Biden, who for years said that Roe 'went too far; and supported a constitutional amendment to overturn it, because he did not 'think that a woman has the sole right to say what should happen to her body.'"

Madison, Wisconsin — Joe Biden's most prominent statement to date following the Dobbs opinion abolishing women's liberty to decide to bear children is to castigate reproductive choice "activists" for not being "mainstream" Democrats.

Kate Bedingfield's statement is reproduced below from the July Washington Post: a story that is virtually blacked-out on MSNBC.

The president has been showing his deep outrage as an American and executing his bold plan — which is the product of months of hard work — ever since this decision was handed down.

Joe Biden’s goal in responding to Dobbs is not to satisfy some activists who have been consistently out of step with the mainstream of the Democratic Party. It’s to deliver help to women who are in danger and assemble a broad-based coalition to defend a woman’s right to choose now, just as he assembled such a coalition to win during the 2020 campaign.

This follows Biden's May refusal to do engage.

"Do something, Democrats," rang out in D.C. in May, Reuters reports.

Nothing from Joe Biden. Nothing.