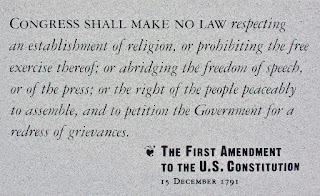 Updated - Madison, Wisconsin — Corporate liberal media is boasting a woman who thought nothing would happen for attending the Jan. 6 protests is getting 60 days in federal prison, (Reilly, Huffington Post).

While Democrats cheer, this development should alarm all free-thinking Americans.

I have attended many politcal protests in Madison, Wisconsin.

Against Apartheid, against the CIA, for state legislation, for union rights, for women's choice, so forth.

Most of the protests were branded anti-American and insurrectionist.

At one point in August 2013, Walker's DOA's Capitol Police Chief actually ordered his cops to encircle people on the capitol rotunda and warn them against partisan "spectating" — (watching) an event or a gathering of people declared illegal by the Capitol police chief, (Kemble, The Progressive) (WKOW-TV (Madison)) (Rowan, Wisconsin Media Media Cooperative)

That same month, a local state representative was threatened with arrest for "spectating," (Davidoff, Isthmus). Hundreds of others were arrested for singing.

What is a shock is how many went along with this idiocy before U.S. District Judge William M. Conley put an end to this regime in Michael Kissick vs. Michael Huebsch and David Erwin, (Mal Contends).

Jennifer Leigh Ryan is accused of cheerleading by Cooper, another ridiculous Democrat judge.

"I don’t think you could have missed the fact that this was no peaceful protest," Cooper said at today's sentencing hearing. "You were a cheerleader, you cheered it on."

First Amendment rights are dead now, as the Biden administration buries and hides these liberties under partisan attacks.

When a population is placed in a state of sufficiently grave fear and anger regarding a perceived threat, concerns about the constitutionality, legality and morality of measures adopted in the name of punishing the enemy typically disappear. The first priority, indeed the sole priority, is to crush the threat. Questions about the legality of actions ostensibly undertaken against the guilty parties are brushed aside as trivial annoyances at best, or, worse, castigated as efforts to sympathize with and protect those responsible for the danger. When a population is subsumed with pulsating fear and rage, there is little patience for seemingly abstract quibbles about legality or ethics. The craving for punishment, for vengeance, for protection, is visceral and thus easily drowns out cerebral or rational impediments to satiating those primal impulses.

We live in dangerous times, and the Democrats are the villains.

We should not be surprised. It was four years ago when the J20 protesters of 2017 were prosecuted for holding to and expressing political views.

As police and state disruption of citizens exercising free speech rights has become normalized, the J20 case would, in a country dedicated to liberties of its citizens, become the focus of saturation media  coverage.

So, would the Jan 6 protesters today but not quite in the way liberals believe.