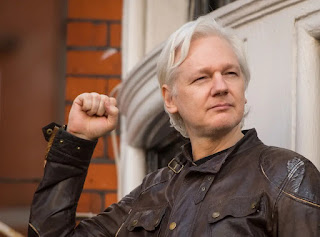 Update: The Biden administration should abandon a course that could lead to the criminalization of whistleblowers and investigative journalism.

A ruling by the British high court looks likely to send Julian Assange to the United States to face draconian, trumped-up espionage charges, (The Guardian).

Human rights, freedom of the press, commitment to truth and simple decency all have been jettisoned by the Biden administration, to the surprise of noone.

The United States is also implicated in a plot to kidnap and murder Assange.

But this latest effort to attempt to torture Assange and drive him insane is ongoing.

"The case against the 49-year-old relates to WikiLeaks’s publication of hundreds of thousands of leaked documents about the Afghanistan and Iraq wars, as well as diplomatic cables, in 2010 and 2011," reports The Guardian.

Assange's real crime is to reveal the duplicity of the Clintons and the Democratic National Committee to the world.

US liberals want Assange to rot in prison for one reason only: his reporting in 2016 - based on true and accurate documents - reflected poorly on Hillary Clinton and the DNC. They believe opposing Democrats is a crime and want their adversaries imprisoned. They are a true menace.