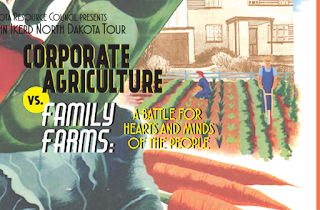 Industrialized agriculture is spreading in Wisconsin and across the nation.

It's toxic, cruel, predatory and without conscience.

This corporate model is also the first step towards foreign ownership of large swaths of American land on which foreign-owned corporate agriculture can pollute with impunity, (Mal Contends), transforming rural America into colonial status, (Mal Contends).

Whether the corporate entities owning industrialized agricultural operations are publicly traded or not, the model of corporate farmers is a clear and present danger to any community where these factory farms extract natural resources and inflict health and pollution costs onto the adjoining region and beyond.

In North Dakota, the North Dakota Corporate Dairy and Swine Farming Referendum, also known as Referred Measure 1, is on the June 14, 2016, ballot in North Dakota.

John Ikerd has the story, North Dakota as a parable for the nation.

FAIRFIELD, Iowa—Measure 1, the North Dakota referendum on corporate farming, is part of a national political strategy to remove all legal obstacles to the corporate takeover of American agriculture.

The campaign features a number of corporate myths:

A corporation is not a person. It is a purely economic entity.

More than 50 years of research, including at UND, confirms that CAFOs depress rural economies, increase poverty and degrade rural communities' quality of life.

As federal statistics confirm, whenever CAFOs have taken over industries—poultry, beef, pork, dairy—more than 90 percent of independent producers are lost.

Reality: New approaches to farming and food production are emerging in response to growing concerns about our industrial food system.

Genetic engineering, air and water pollution, antibiotic resistance, animal welfare and carcinogenic pesticides are just a few of these concerns.

The natural, organic and local food movements are the most visible responses to these concerns.

Farmers markets and co-op grocery stores such as those in Grand Forks, Bismarck and Fargo provide markets for these products. Multi-farm food networks and home-delivery programs let sustainable farmers connect with hundreds of thousands of customers in distant cities.

This is the future of food and farming—not CAFOs.

Myth 4: Corporate farming is necessary to meet the demands of a growing global population.

Reality: Contrary to popular belief, today's industrial agriculture doesn't feed the people of the world. It mainly produces feed for animals and fuel for automobiles.

U.N. studies also show that production on these farms could be doubled or tripled without using industrial technologies or relying on outside corporate funding.

Besides, corporations probably want the right to buy farmland more than the right to operate CAFOs. They know CAFOs are not a sustainable system of production and will face growing public demand for effective regulation. They also know there always will be a need for land to produce food, not matter how it is farmed.

About 70 percent of U.S. farmland is projected to change hands within the next 20 years. Farmland already nearly tops of the list of opportunities for speculative capital investments.

North Dakota's current anti-corporate farming law is an obstacle to such investments.
---
Ikerd is a professor emeritus of agricultural economics at the University of Missouri. At the invitation of the Dakota Resource Council, he recently spoke against Measure 1 in four cities across North Dakota.
Posted by MAL at 7:48:00 AM