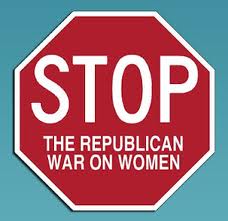 Update II: "Not even a month has gone by since Georgia Republican Terry England compared women to cattle, and now, RNC Chairman Reince Preibus has gone even lower than that."

Update: Salon Magazine asks: Did Scott Walker just give Obama an opening to drive an even bigger wedge between women and the GOP?

What is it with Republicans and their hatred of women?

It's part misogyny, part political calculation of its religious base.

In Wisconsin, the Republicans are sticking to the national calculation that the religiosity of the GOP base will bring victory at the polls, and the hell with women in the name of 'religious freedom.'

Examples of the GOP war on women in Wisconsin and across the nation abound (see some late-breaking examples below):


The White House and the U.S. DoJ are hitting back.

Here's a partial list of the latest GOP assaults on women.

Rep. Christine Sinicki and a list of lawmakers released the following statement:
By signing these bills into law, Gov. Walker has opened up another front in the Republican war on women. The governor has made it clear that he believes women do not deserve equal pay for equal work, that women cannot be trusted to make their own health care decisions and that the government should be dictating the curriculum to local school districts.
Posted by MAL at 8:08:00 AM