One of Four Republicans Think 'Obama Is the Anti-Christ'—Seriously 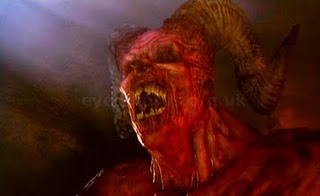 I guess we should not be surprised by the news.

How do rational-minded conservatives remain silent?

Plenty of conservatives here in Wisconsin; anyone believe this nonsense that our President is the anti-Christ.

Consider Alexandra Pelosi. She has a HBO special, Right America-Feeling Wronged, that interviews many of the folks of today's Republican Party for whom this concern with the anti-Christ is apparent. They ain't so humanistic.

Watching these [all white] people in Pelosi's documentary and the continual news of racism and dominionist religion across the nation, my immediate thoughts are to the German Volk myth, the romanticized idealization of the plain, working-class folks laboring against the anti-Volk in their very midst.

You can see these white, heroic-Obama-hating people in Pelosi's work.

In Germany, the alleged anti-Volk were the Jews.

Today in America, the anti-Volk is composed of the blacks, browns, immigrants, gays, assorted "elites," (down-South the Jews still occupy the anti-Volk status), some incarnation of the Other. [Note: Recommend Norman Cohn's The Pursuit of the Millennium and Warrant for Genocide for historical insights into the deranged mind, crazy myth, and the danger of passive compliance in the face of militarism.]

The American Volk in all their incoherent rage are showing up in the polls and in the politics of the Republicans and Tea Partiers with all their imaginary friends and enemies within.

Here's the news from Blue Texan at FireDogLake:

No, this isn’t an Onion headline. Yes, it is yet another poll that shows Republicans are out of their fucking minds.

On the heels of health care, a new Harris poll reveals Republican attitudes about Obama: Two-thirds think he’s a socialist, 57 percent a Muslim—and 24 percent say “he may be the Antichrist.”

In fairness, that question was clearly designed to make conservatives look bad. I mean, it’s completely possible that Obama may be the Antichrist. Has anyone thoroughly checked him for the Mark of the Beast? How can really we be sure?

Other findings of the Harris poll, due out tomorrow, include:

I’m surprised that only about half of the polled Goopers are birthers — that feels low to me.

But we shouldn’t be surprised that nearly 40% think he’s the second coming of Adolf Hitler, since elected Republicans and clowns like Glenn Beck and the Pantload make the comparison often.

Nice party you’ve got there, GOP.