Thank You Chris Hedges, and Listen Up Mr. President 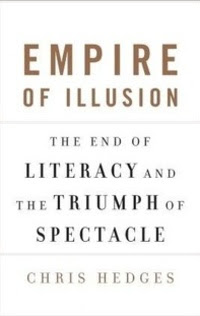 With President Obama's State of the Union address on Wednesday, Americans can look to this week as the time when Obama announced a decisive change in direction from that which the corporatist, neocon-enabling administration has brought our country. Is Obama up to the task at hand? Christopher Hedges lays out the problem:

Celebrity Culture and the Obama Brand
by Christopher Hedges

Barack Obama is a brand. And the Obama brand is designed to make us feel good about our government while corporate overlords loot the Treasury, armies of corporate lobbyists grease the palms of our elected officials, our corporate media diverts us with gossip and trivia, and our imperial wars expand in the Middle East. Brand Obama is about being happy consumers. We are entertained. We feel hopeful. We like our president. We believe he is like us. But like all branded products spun out from the manipulative world of corporate advertising, this product is duping us into doing and supporting a lot of things that are not in our interest.

What, for all our faith and hope, has the Obama brand given us? His administration has spent, lent, or guaranteed $12.8 trillion in taxpayer dollars to Wall Street and insolvent banks in a doomed effort to re-inflate the bubble economy, a tactic that at best forestalls catastrophe and will leave us broke in a time of profound crisis. Brand Obama has allocated nearly $1 trillion in defense-related spending and the continuation of our doomed imperial projects in Iraq, where military planners now estimate that 70,000 troops will remain for the next fifteen to twenty years. Brand Obama has expanded the war in Afghanistan, increasing the use of drones sent on cross-border bombing runs into Pakistan, which have doubled the number of civilians killed over the past three months. Brand Obama has refused to ease restrictions so workers can organize and will not consider single-payer, not-for-profit health care for all Americans. And Brand Obama will not prosecute the Bush administration for war crimes, including the use of torture, and has refused to dismantle Bush's secrecy laws and restore habeas corpus.

Email ThisBlogThis!Share to TwitterShare to FacebookShare to Pinterest
Labels: 2009), Chris Hedges, Empire of Illusion: The End of Literacy and the Triumph of Spectacle (Nation Books