The One True Church 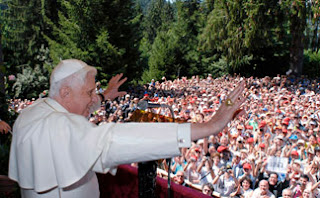 The one-true-church declaration was issued to clear up the "confusion and doubt" piling up on the church's relationships among other faiths, with the approval of Pope Benedict XVI.

If all those child molestations that the church covered up seem inconsistent with its self-declared “one, true church” pronouncement; just know that none other than the supreme authority on pacifism and tolerance, our own President Bush, said of Pope Benedict XVI: “He's a man of great wisdom and knowledge.”

The Pope earlier this month had also approved the Vatican's inclusion of a prayer for the conversion of Jews in its Latin Mass, which drew the ire of the ADL.

"We are extremely disappointed and deeply offended that nearly 40 years after the Vatican rightly removed insulting anti-Jewish language from the Good Friday liturgy, that it would now permit Catholics to utter such hurtful and insulting words by praying for Jews to be converted ... ," Abraham H. Foxman, ADL National Director, said in a statement.

Excuse me, but Pope Benedict XVI: You stink.

Marc Perelman | Wed. Jul 18, 2007
Two separate documents issued by the Vatican last week are raising concern among liberal Catholics, Protestants and Jews that Pope Benedict XVI is turning back the clock on four decades of ecumenism.

On July 10, the Holy See reiterated a controversial statement from 2000 that the Protestant and Christian Orthodox denominations are not “true” Christianity. Four days earlier, the pope authorized the wider use of a Latin mass that may allow for the inclusion of a previously disavowed prayer calling for the conversion of Jews.

The pair of pronouncements has caused substantial consternation among the more liberal streams of Catholicism, who see the German pope steering the church in a more traditional direction. While some Jewish communal officials have urged Jews to stay out of what they perceive to be primarily an intra-Catholic debate, others are continuing to sound a warning about the statements’ effect on interfaith relations.