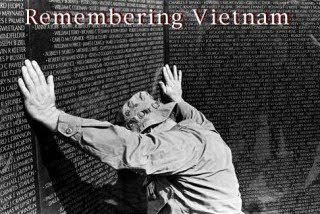 - Vietnam-era veterans are treated by neocons and their allies are lazy, shifty malingerers who do not deserve the disability benefits pertaining to PTSD and Agent Orange, areas of concern that to this day the rightwing fights with the message: Get over it, and no free rides for you. Shocking disrespect for a generation still suffering. -

Vietnam-era veterans are accustomed to American hostility across society enduring for decades.

The American culture has changed, the Wall and Vietnam veteran popular Welcome back events stand as monuments of respect and empathy for what servicemembers endured in an unpopular war begun by lies.

But a lasting enmity persists in an ideological right-wing cabal opposed to the idea that Vietnam-era veterans receive disability benefits.

Their efforts are cold slaps in the face of veterans.

The Obama administration has politically allied itself with veterans in a flurry of pro-veterans initiatives, including the implementation of new PTSD regulations for disability claims and an extended Agent Orange presumptive illness rules published today, both of which affect Vietnam-era veterans profoundly in addressing severe health problems.

Amid rumors of a coming housecleaning of benefits-hostile neocons in the VA and Veteran Benefits Administration (VBA), including mid-level VA managers, the neocon anti-veteran PR project has begun.

A national AP August 30 piece, ostensibly about diabetes and how it has not been proven to be caused by Agent Orange, is the latest in a line of reports asserting that veterans have it too easy in the VA, VBA claims system.

This could have been written by the American Enterprise Institute: It was written by Mike Baker, evidently the new anti-benefits writer, Allen G. Breed has been taken off the veterans' AP hit-pieces duty.

The Politico, a neocon journal used as an entree into the mainstream is in the anti-veteran game. Old age and Agent Orange are "closing in on Vietnam veterans, a legacy of hurt for those who served -- and a very big bill for American taxpayers," reads the Politico.

This vets-cost-too-much is a meme coursing through the Internet, taking the tract of Sally Satel who has made a career of knocking Vietnam-era vets.

Satel is part of a network, a "cabal," as veterans' advocate Paul Sullivan calls them, of anti-benefits ideologues in the media, the Congress [believe Sen. Jim Webb (D-VA) has been brought off] and of course in the VA.

It's not war that is costly, about which lawmakers have no reservations about spending. No, it's those damn veterans who should go away or at least die.

We can expect more Associated Press writer Mike Baker anti-veteran talking points coming from politicians, pencil-neck thin tank residents and of course the remaining hacks at the VA and VBA.

Here is some the language Baker uses in his piece asserting that the VA and VBA bend over backwards to be fair to veterans:

- even though decades of research into the defoliant have failed to find more than a possibility that it causes the disease, diabetes

- Because of worries about Agent Orange, about 270,000 Vietnam veterans — more than one-quarter of the 1 million receiving disability checks — are getting compensation for diabetes, according to Department of Veterans Affairs records obtained by The Associated Press through the Freedom of Information Act.

- Tens of thousands of other claims for common ailments of age — erectile dysfunction among them — are getting paid as well because of a possible link, direct or indirect, to Agent Orange.

- And the taxpayers may soon be responsible for even more: The VA said Monday that it will add heart disease, Parkinson's disease and certain types of leukemia to the list of conditions that might be connected to Agent Orange. The agency estimates that the new rules, which will go into effect in two months unless Congress intervenes, will cost $42 billion over the next 10 years.

- Lawmakers and federal officials who have reservations about the spending are loath to criticize a program that helps servicemen. They have largely ignored a 2008 report in which a group of scientists said the decision to grant benefits to so many on such little evidence was "quite extreme."

- "There needs to be a discussion about the costs, about how to avoid false positives while also trying to be sure the system bends over backwards to be fair to the veterans," said Jonathan M. Samet, a public health expert who led that study and now serves as director of the Institute for Global Health at the University of Southern California.