"We learn, at the last, to look at our brothers as aliens, men with whom we share a city, but not a community, men bound to us in common dwelling, but not in common effort. We learn to share only a common fear - only a common desire to retreat from each other - only a common impulse to meet disagreement with force," said RFK on April 5, 1968, the day after the assassination of King.

What would Robert Kennedy say today?

RFK would be appalled by the police-prosecutor-prison state that destroys lives, life after life, family after family, at a police force that seems to regard people roughly as they would inspect a beaker of urine.

Absent a radical new project on the role of the police and an evaluation of the structures of our society, more American human beings will be lost.

A new generation is carrying the torch for humanity: Black Lives Matter.

We should listen, to them and voices from history.

ROBERT KENNEDY'S CITY CLUB OF CLEVELAND SPEECH, 1968. On April 5, 1968, one day after the assassination of Dr. Martin Luther King, Jr., Senator Robert F. Kennedy delivered a speech entitled "On the Mindless Menace of Violence" at the CITY CLUB OF CLEVELAND. In the 10-minute speech Kennedy deplored violence in American society. "This is a time of shame and sorrow," he told the hushed audience. Just two months later, Kennedy himself would be assassinated.

This is a time of shame and sorrow. It is not a day for politics. I have saved this one opportunity to speak briefly to you about this mindless menace of violence in America which again stains our land and every one of our lives.

It is not the concern of any one race. The victims of the violence are black and white, rich and poor, young and old, famous and unknown. They are, most important of all, human beings whom other human beings loved and needed. No one - no matter where he lives or what he does - can be certain who will suffer from some senseless act of bloodshed. And yet it goes on and on.

Why? What has violence ever accomplished? What has it ever created? No martyr's cause has ever been stilled by his assassin's bullet.

No wrongs have ever been righted by riots and civil disorders. A sniper is only a coward, not a hero; and an uncontrolled, uncontrollable mob is only the voice of madness, not the voice of the people.

Whenever any American's life is taken by another American unnecessarily - whether it is done in the name of the law or in the defiance of law, by one man or a gang, in cold blood or in passion, in an attack of violence or in response to violence - whenever we tear at the fabric of life which another man has painfully and clumsily woven for himself and his children, the whole nation is degraded.

"Among free men," said Abraham Lincoln, “there can be no successful appeal from the ballot to the bullet; and those who take such appeal are sure to lose their cause and pay the costs."

Yet we seemingly tolerate a rising level of violence that ignores our common humanity and our claims to civilization alike. We calmly accept newspaper reports of civilian slaughter in far off lands. We glorify killing on movie and television screens and call it entertainment. We make it easy for men of all shades of sanity to acquire weapons and ammunition they desire.

Too often we honor swagger and bluster and the wielders of force; too often we excuse those who are willing to build their own lives on the shattered dreams of others. Some Americans who preach nonviolence abroad fail to practice it here at home. Some who accuse others of inciting riots have by their own conduct invited them.

Some looks for scapegoats, others look for conspiracies, but this much is clear; violence breeds violence, repression brings retaliation, and only a cleaning of our whole society can remove this sickness from our soul.

For there is another kind of violence, slower but just as deadly, destructive as the shot or the bomb in the night. This is the violence of institutions; indifference and inaction and slow decay. This is the violence that afflicts the poor, that poisons relations between men because their skin has different colors. This is a slow destruction of a child by hunger, and schools without books and homes without heat in the winter.

This is the breaking of a man's spirit by denying him the chance to stand as a father and as a man among other men. And this too afflicts us all. I have not come here to propose a set of specific remedies nor is there a single set. For a broad and adequate outline we know what must be done. When you teach a man to hate and fear his brother, when you teach that he is a lesser man because of his color or his beliefs or the policies he pursues, when you teach that those who differ from you threaten your freedom or your job or your family, then you also learn to confront others not as fellow citizens but as enemies - to be met not with cooperation but with conquest, to be subjugated and mastered.

We learn, at the last, to look at our brothers as aliens, men with whom we share a city, but not a community, men bound to us in common dwelling, but not in common effort. We learn to share only a common fear - only a common desire to retreat from each other - only a common impulse to meet disagreement with force. For all this there are no final answers.

Yet we know what we must do. It is to achieve true justice among our fellow citizens. The question is now what programs we should seek to enact. The question is whether we can find in our own midst and in our own hearts that leadership of human purpose that will recognize the terrible truths of our existence.

We must admit the vanity of our false distinctions among men and learn to find our own advancement in the search for the advancement of all. We must admit in ourselves that our own children's future cannot be built on the misfortunes of others. We must recognize that this short life can neither be ennobled or enriched by hatred or revenge.

Our lives on this planet are too short and the work to be done too great to let this spirit flourish any longer in our land. Of course we cannot vanish it with a program, nor with a resolution.

But we can perhaps remember - even if only for a time - that those who live with us are our brothers, that they share with us the same short movement of life, that they seek - as we do - nothing but the chance to live out their lives in purpose and happiness, winning what satisfaction and fulfillment they can. 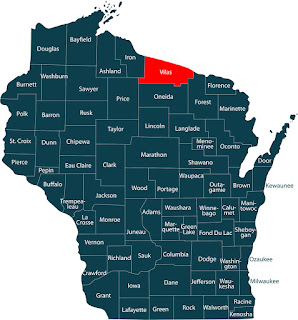 That's up north from the standpoint of Madison — Ashland, Iron and Vilas counties, for example, (see map at right).

The Ojibwe's right to fish and gather food is protected by federal treaty, and the sight of brown-skinned people fishing, for example, has long provoked rage from local racists. The sight of an Ojibwe breathing isn't such a gratifying scene either.

Can you, the reader, imagine a dark-skinned Native boating or walking around like he's a human being? No wonder whites want to kill them.

After initially filing hate crime and other charges, the corrupt Vilas County District Attorney Martha Milanowski and Kelsey agreed to a plea deal that includes a minor fine and other community service action performed by Kelsey, (Wisconsin Circuit Court Access).

Vilas County District Attorney Martha Milanowski said hate crime and use of a dangerous weapon charge modifiers were dropped because Kelsey pleaded no contest to possessing a firearm while intoxicated and interfering with Ojibwe fishing rights, which is a Wisconsin Department of Natural Resources ordinance violation.

Kelsey can have the charge of possessing a firearm while intoxicated removed from his record if he accomplishes certain criteria over the next year, which include 80 hours of community service, no drinking or possession of alcohol and no possession of firearms.

He also must write a letter of apology to the victims, which must include an acknowledgement of the right of Indigenous people to exercise their treaty rights. The letter must be published in local newspapers.

Vilas County Sheriff Joseph Fath previously said Kelsey had not meant to frighten tribal harvesters and Kelsey claimed he was shooting at a squirrel.

The Ojibwe face a corrupt and racsit Sheriff Joseph Fath, a corrupt District Attorney Martha Milanowski, and a good chuck of white racists.

Kelsey's plea to Interfering with Hunting/Fishing/Trapping (29.083(2)(a)) should rightfully be attempted murder.

A reader can imagine what would happen if a black man fired a shotgun at a white person whom he didn't like, in Kenosha, for example.

We don't hear about these outrages from up north in Madison except for a few good reporters like Frank Vaisvilas and amazing human beings on Facebook, which is a good argument for the social utility and the multiplicity of voices on social media. 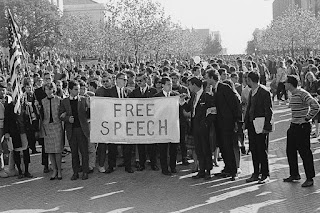 Updated - The psychology of the censor is at work following the Jan 6 capitol occupation.
Twitter has permanently banned attorney Sidney Powell, and Michael Flynn, (Just the News).

Their crime? A Twitter spokesperson told media that they were removed "in line with [the company's] policy on Coordinated Harmful Activity."

This is beginning to to look like the banishing of heretics, with some of the hallmarks of a political Putsch.
I don't trust it.

Liberals are working to banish political movements from the public square. And what the liberal consensus does is not drawing a lot of opponents.

Glenn Greenwald is one.

'The right to freedom of opinion is of fundamental importance,' Steffen Seibert, Merkel’s chief spokesman, told reporters in Berlin on Monday." https://t.co/1f8X98ZJIY

What makes Merkel's comments particularly striking -- apart from her well-reported acrimony with Trump -- is, as @AliceFromQueens noted, Europe generally and Germany specifically have far less permissive free speech traditions than the US. Yet even Merkel finds this alarming.

Strength through unity, unity through faith. And no questions.
Posted by MAL at 12:59:00 PM No comments: