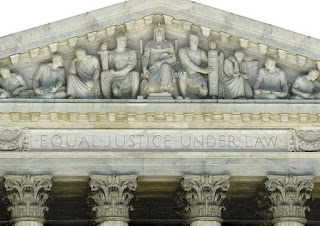 Madison, Wisconsin — If you ever have spoken with a mother of a wrongfully convicted victim, you know why you should work to free the innocent and condemn the judiciary.

Mothers are up against unyielding judges and prosecutors who operate in collusion with other politicians, against the innocent.

The judiciary branch at all levels of operation is often a black-robed bulwark against justice. All those wrongful convictions we hear about in the news?

These miscarriages of justice are presided over by judges, but it's taboo to point out that strutting judges have ruined lives, and that judges are catastrophically wrong in how they conducted themselves.

Judges, especially federal judges, are commonly absurd figures, yet unless you read Lara Bazelon (as one should), this reality of the judiciary is protected by professional taboo, cult command, corporate media and Democrats.

Richard Posner, public intellectual and former judge on the Court of Appeals for the Seventh Circuit, upon his retirement, termed many federal judges, "reactionary beasts," manipulating statutes and the Constitution as they engineer desired results in federal litigation.

But even Posner shied away from a full-blooded critique for reasons unknown.

The United States Supreme Court is poised to launch a massive assault against liberty, and escalate judicial malice to a new level — the long-planned destruction of women's liberty, in accordance with the Catholic Church and other political actors.

This coming instantaneous ripping away of foundational rights is not inducing national Democratic Party voices to demand radical reform of the judiciary branch (Roe v. Wade, Politico, Dobbs v. Jackson Women’s Health Organization). Last year, at oral arguments in Dobbs, Democrats offered statements that they may be open to considering and looking at the issue of Court reform and not "doing nothing." Seriously, that's what Democrats had to say on the eve of the destruction of Roe, and Planned Parenthood v. Casey.

Rules of Professional Conduct of attorneys generally protect the judges' cult, and broadly forbid attorneys from pointing out intellectually dishonest operations of judges and other attorneys.

In fact, attorneys operate under an affirmative duty to "further the public's ... confidence in the rule of law and the justice system." Democrats in Congress and the presidency follow these taboo dictates, no matter the provocation.

Even when the justice system and its actors are dishonest and destructive. Can you imagine a member of Congress or a president demanding public confidence and respect, on the pain of contempt and imprisonment? Their popularity would tank immediately, and such officials would be suspected of having taken leave of their senses.

Not so the judiciary branch.

Writes Lara Bazelon in The Strand Magazine in June 2021:

Judges are the kings and queens of the legal system, literally looking at the populace they rule over from perches high up on a mahogany dais.  Referred to as 'Your Honor,' they demand constant verbal genuflection and scurrying about in response to their commands that is the equivalent of bowing and scraping.

'God save the United States and this Honorable Court!' the U.S. Marshal solemnly intones after the gavel comes down, a roomful of people stand up, and the nine justices of the Supreme Court enter the hallowed marble fiefdom where they preside.

In federal court, you don’t go anywhere or do anything without asking for permission.  'May it please the court?' 'May I approach?' 'May I confer with my client?' 'May I ask for a brief recess so that I can go to the bathroom and throw up because even though I am deathly ill you made me show up anyway?'

Judges are the closest thing that America has to royalty. Their power is enormous: what they do changes the courses of fortunes and lives.  They can award millions, even billions, they can send people to prison for the rest of their lives—or to their deaths. Often their decisions bind future generations. Because judges have so much power and responsibility, we assume they are eminently deserving of the honor and authority conferred upon them.

As the Dobbs leak shows, the judiciary does not function in an intellectually honest, apolitical fashion objectively finding facts, doctrine and application of law like detached agents of pure epistemology, hard science enforced by tyrannical control of courtrooms and taboo rules against public criticism.

Congress needs to begin reform of the judiciary that will include mandates that every oral argument, judicial memo and correspondence be revealed to the American people in as close to real-time as possible.

Judges cannot be trusted with the honor and authority conferred upon them.

The institutional narcissism and unparalleled arrogance of the judicial branch, working for totalitarian movements, needs to come to an end.