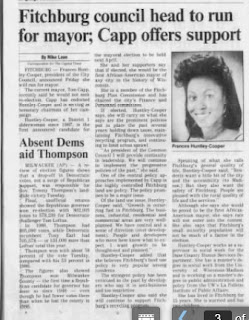 The narcissism and anti-democratic attitude towards the Fitchburg people of Ms. Huntley-Cooper are astounding. C'mon, don't we the people of Fitchburg deserve even a comment? Guess not.

Fitchburg, Wisconsin — Emily Hamer reports in the Wisconsin State Journal on an effort to change the name of Fitchburg City Hall to the Frances Huntley-Cooper Municipal Building, (Madison365).

Ms. Huntley-Cooper is the first African American mayor in Wisconsin history. She served one term, unremarkable, from 1991 to 1993.

The effort reportedly is the brainchild of Michael Johnson, president and CEO of the Boys & Girls Clubs of Dane County, and others. Johnson told Madison365 he has considered his decision for about a year.

Johnson is not a resident of Fitchburg, and was not a Wisconsin resident when Huntley-Cooper served one term as mayor beginning in 1991.

Renaming City Hall is a foolish idea on too many levels to itemize here.

It seems redolent of the compulsion to establish a Ronald Reagan monument in every county in the United States, or plastering someone's face on public structures to honor their greatness, like Stalin, Mao or Saddam Hussein.

But characterizing, honoring or debasing any human being on the basis of skin color, even a one-term mayor who served some 30 years ago, honors racial classification schemes leading anti-fascist writers, such as Norman Cohn, Ashley Montagu and Marvin Harris, to note similar enterprises as meaningless myth, an idea that 'race' enjoys a status as anything but irrational, nonsensical and demonstrably false.

I don't know why Frances Huntley-Cooper endorses this effort.

Thirty-one years ago, I broke the news in The Capital Times that Ms. Huntley-Cooper would become Wisconsin's first black mayor in Nov. 1990 when she declared for a mayoral run.

Huntley-Cooper downplayed the fact of 'Wisconsin's first black mayor' in a phone conversation then, and I had to rewrite a draft incorporating her comments and stated campaign priorities before I filed the piece.

What has changed since then, in my view, is the rise of woke identity politics that glorifies and validates 'race' as a system purporting to have non-zero scientific status.

I don't think the liberals raising this flag of the cancel culture have the faintest clue how toxic and ridiculous is their performative theater in this proposed renaming, not seen since the great removal of the 42-ton boulder from UW-Madison because the pre-Cambrian rock was deemed racist.

Hey, nothing against Frances Huntley-Cooper, but I think I can make a good case for renaming City Hall after Doug Morrissette, Mark Vivian, Roger Tesch, Jay Allen, Tom Clauder, Dave Herbst or current Mayor Aaron Richardson, among dozens of others who have served our city honorably.

We could even emblazon the front of City Hall with a likeness of the chosen's face.

If we are going to brand and rename monuments, buildings and parks, then I want Western Hills Park by our home renamed after my wife, Jackie Captain, for her outstanding work on anti-fascist artists, Ben Shahn and Eugene Higgins.

Further, I want to rename my street, now Monticello Way in the Jamestown neighborhood — named after a seventeenth century indentured servant-cum-slave colony — renamed Don Kosterman Way in recognition of this Fitchburg resident's academic work on the Milwaukee Police Dept's unconstitutional effort to sabotage the publishing of Kaleidoscope in the 1960s-70s.

See what I am getting at here?

Representative democracy and municipal policy are not about one person, or even one body of elected persons.

Especially on the municipal level, democracy is about the people and their liberties that make democratic processes a breathing monument that lives forever for future generations.

If we are truly to rename a such a vital public building as City Hall, the process being contemplated — a Common Council resolution — is inadequate.

We need a much more deliberative process that would include and invite extensive public input, a long list of nominations, including a referendum that offers no-name change at all, because every present and future Fitchburg resident has a stake in this enterprise.