Venerable Cooperative Turns on Its Members

Madison, Wisconsin — The Dane County community has voiced anecdotal complaints the past several years about the conduct of UW Credit Union employees toward its members.

Personnel at the UW Credit Union have become genuinely mean-spirited, bordering on hostile to some longtime members, an absurd situation in light of the fact credit unions exist to serve their members.

Part of the problem is a narcissism and corporatism creeping into this increasingly alien culture of an institution organized as a cooperative.

For Wisconsinites accustomed to Wisconsin friendliness, the UW Credit Union is about to become meaner.

The UW Credit Union is imposing a binding arbitration agreement on its members, and the clock is ticking, because members have 30 days, until June 3, 2021, to opt out before members lose several of their legal rights, including trial by jury for civil actions against the UW Credit Union.

On and about May 3, 2021, longtime members of the Credit Union received a five-page letter alerting members that the new Arbitration Agreement, Class Action Waiver and Jury Trial Waiver would be used to settle claims of alleged Credit Union misconduct.

Members were not consulted on this new policy, according to several members, UW-Madison alumni, reached this weekend.

The UW Credit Union just thought up the Arbitration Agreement, Class Action Waiver and Jury Trial Waiver, and informed members they have 30 days to opt out, if and only if members look up Section M in the fine-print May 3 letter, and then send another letter to the indicated address. [See Section M, p. 5 in image below.]

But the new forced arbitration policy raises more questions than it answers.

If arbitration agreements are such a good deal for members, why does the Credit Union impose a use-it or lose-it opt-out agreement?

The Credit Union says losing rights is all about "improving the financial well-being" of members, (p.2), citing class action suits, for example.

Forced arbitration of the kind the UW Credit Union is imposing, means any dispute between members and the Credit Union are to be settled by arbitrators in a binding decision, and the results are secret.

This arbitration agreement lessens Credit Union accountability and members are at the mercy of an increasingly corporate and hostile organization.

A member contacted says he/she would not even know where to voice a complaint about the new agreements, and is afraid of retaliation.

The practice of imposing forced arbitration agreement on patrons, members, owners and employees is common in corporate America.

But as the UW Credit Union has become bigger over the decades, many Wisconsinites feel it has lost touch with its own members, and this latest policy is part of trend towards the adversarial with respect to the very community the institution was created to serve.

The UW Credit Union letter is reproduced below to a longtime member. 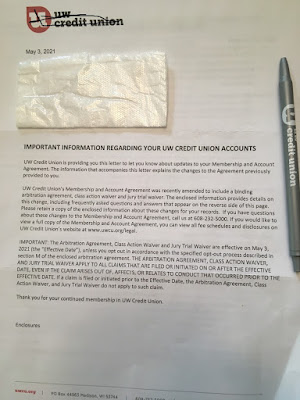 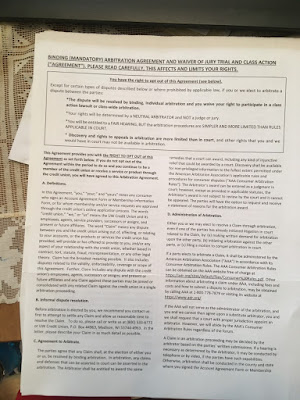 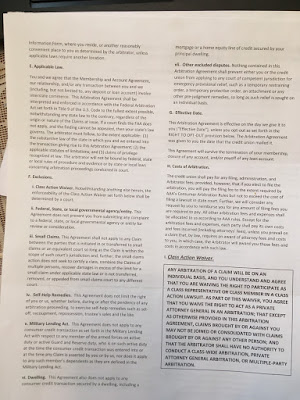 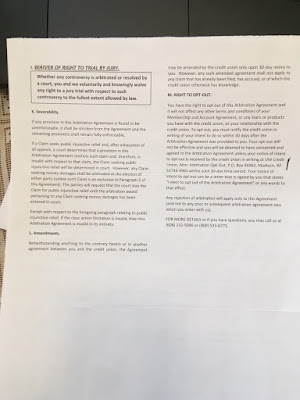