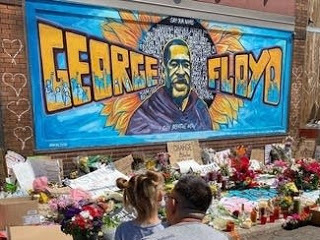 Madison, Wisconsin — Just before 3:00 p.m., April 20 Central time, I checked Twitter and read human rights attorney Laura Nirider writing that a verdict had been reached in State vs. Derek Chauvin.

The little prick is guilty on all counts, I said.

It seemed improbable to me the jury would deliberate only some 8 hours and bring back a not guilty verdict, so I was optimistic the human garbage Chauvin would face decades behind bars.

I took pleasure in musing Chauvin would face violence most of his life for what the bastard did to George Floyd.

No love in my heart for police anymore.

The Minneapolis Police of course tried to lie their way of out this murder, as police do, reporting the day after the May 25, 2020 murder that a "medical incident during police interaction," had resulted in a fatal, (Business Insider).

Most who encounter routine violent incursions, constant menacing, malice, and pathological dehumanization conclude in part that abolition needs to be at least a part of the discussion.

From Georgia to Wisconsin to Minnesota, the way police dehumanize, humiliate and debase people at traffic stops is repulsive enough, nevermind the murders for the moment.

It gives me license and registration, it doesn't move, it turns off the phone, or else it get tazed.

What the fuck is wrong with you, buddy?

Police take up massive chunks of municipal budgets, so a cop spends 20-30 years living off the people he fucks over, retires and then lives off his pension. Gangsters.

For a how-to get rid of police, see Boston Review's Power over Policing. 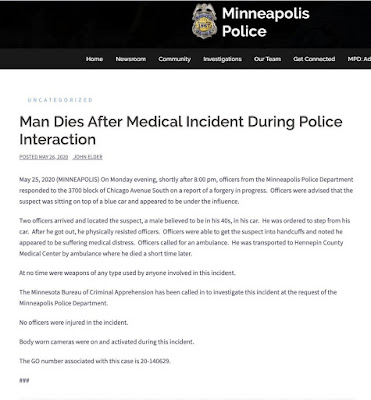