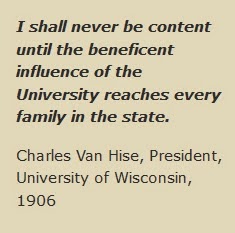 The documents released Friday to the Wisconsin State Journal (DeFour) and other journalists flatly contradict Walker's evolving statements in February that Walker's crafted effort to remove the Wisconsin Idea from Wisconsin statutes was the result of a "drafting error," "a mistake" and "no big deal."

The new information comes as the scandal-plagued Walker comes under closer scrutiny for a possible run for the presidency.

In Wisconsin, Walker's tendency of evading questions and outright lying are well-known, a propensity the national press is increasingly noting.

Walker's proposed 2015-17 Biennial Budget was ballyhooed by the administration which called it a "Freedom and Prosperity Plan."

The story on Walker's proposed radical transformation of the world-class University system was broken by the Center for Media and Democracy's PRWatch (Jonas Persson and Mary Bottari) in early February.

The new documents include administration talking points showing a communications plan for specific questions defending the removal of the Wisconsin Idea, contradicting Walker's explanation that the plan was a 'drafting error," a falsehood later promoted by Walker's appointee, Budget Director Michael Heifetz.

A botch does not come with talking points and line-by-line instructions deleting iconic language of a revered institution. DeFour appears to have forgotten in drafting today's piece he a journalist and not a Walker spin doctor. The same spin that Walker's intentional striking of the Wisconsin Idea was "botched" was printed in a February 6 piece co-authored by DeFour.


Gov. Scott Walker and aides scrambled Thursday to respond to revelations that his administration had insisted to University of Wisconsin officials on scrapping the Wisconsin Idea, the guiding principle for the state's universities for more than a century.

In a rapid revision to his own comments on Wednesday, the Republican governor acknowledged that UW System officials had raised objections about the proposal.

They had been told the changes were not open to debate.

While backtracking on earlier comments to reporters, Walker continued to insist in a statement that he hadn't known what his own administration was doing until after the proposal became public and caused a firestorm of criticism. ...


The State Journal pieces are framed like a Walker propaganda sheet even as its own and other media's reporting of facts show Walker lied about the Wisconsin Idea story.

"First Walker defended the change. Then he backtracked and said it was a 'drafting error.' Then, after multiple news reports showed his staff's fingerprints were all over plans to delete wording from the UW's mission in the 2016-17 budget bill, he issued a lengthy and tortured statement Thursday [Feb. 5] saying it was all just a miscommunication," notes Rob Thomas. (The Capital Times)

Walker still is hostile to the Wisconsin Idea as Walker targets the UW Extension in his proposed budget. (Mal Contends)

The search for truth remains popular with the Wisconsin people, with Walker and propaganda sheets not so much.