Updated - Waters of the US rule released online.

Over the weekend, news was reported about a critical development in the fight to protect surface waters and our drinking water.

"The Obama administration is expected in the coming days to announce a major clean water regulation that would restore the federal government’s authority to limit pollution in the nation’s rivers, lakes, streams and wetlands. Environmentalists have praised the new rule, calling it an important step that would lead to significantly cleaner natural bodies of water and healthier drinking water," notes a piece by Coral Davenport in the New York Times.

The opponents to the rule are the polluters, the poisoners on a vast scale, especially Big Ag (Big Agriculture), Big Oil, golf course lobbyists, fertilizer and pesticide producers, all protected by Republicans on the state and federal levels.

The water protection rule is critical to Wisconsin, part of a region where polluters from Big Ag have proliferated, and where the nation—torched by drought and climate change—has cast its eyes at the abundant fresh water, a happy accident bequeathed by the last Ice Age as mammoth glaciers retreated.

As citizen groups have objected, weak-kneed politicians such as Scott Walker and State Rep. Scott Krug (R-Nekoosa) [who threatened this writer with a libel suit for being called out for fronting for polluters before Krug backed down] have jumped in square on the side of the polluters, proposing to eviscerate an already ineffectual state Department of Natural Resources while fronting for massive diary operations, as property values of constituents plummet.

Experts warn of the exceeded carrying capacities of the land to withstand the millions of tons of liquid cow manure injected annually into the environment under the new model of industrial farming called the CAFO (Confined/Concentrated Animal Feeding Operation).

The E.P.A. and the Army Corps of Engineers jointly proposed the rule last year and held hundreds of hearings. This week we can expect the result that would likely be utilized against the 100s of massive CAFOs that have begun operations with no concern whatsoever for the neighbors or the water. (Carrell, Wisconsin Rapids Daily Tribune)

From Wisconsin, better the words of citizen groups from Wood, Adams and Juneau counties, though few areas of the state are untouched as almost one-half of Wisconsin waterways are federally listed as impaired due to phosphorus, nitrates, mercury and other pollution. 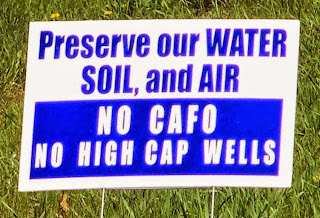 I hate being the bearer of bad news, but I think we all need to know what we face if this CAFO is built in Saratoga. And, I believe we need to work together as a community to try to fight it off. As Bob Doughty states below, once its here, what can you do? These are Bob's words regarding the New Chester Dairy CAFO just south of Adams-Friendship in Grand Marsh. Grand Marsh is a tiny, rural community, not anywhere near as populated as our area. If he has issues, imagine yourself under the conditions he describes.

I woke up one day and there was a CAFO, or, at least the start of one, with large equipment moving earth and foundations being constructed for the barns. It took me by surprise. While I may have heard some rumors about it, I largely ignored it. I moved up here from the big city 20 years ago to get away from it all.  I seldom read the newspapers and never attended town board meetings. I hunted and fished and enjoyed living in a rural, woodsy environment just a short drive from Wisconsin Dells.  While the CAFO owners sold it as a boon to our community of Grand Marsh, it has become a nightmare.

I live just a mile from the actual farm with its huge barns and processing center.  The agriculture fields where they spread the cow manure slurry is across the road from me. A large 10” diameter pipe feeds the manure from the ponds to the fields where it is then piped to the plows that spread it and knife it in to the soil.  The smell is indescribable.   I have to cover my face and eyes walking from my house to the car.  And, the smell from the actual farm a mile or so away is a near constant.  It was especially bad when they first started and had no digester for the manure.  The constant ammonia in the air would burn your eyes.  With the digester there is some improvement, though most every night at about 8:00, for at least a couple hours, they are performing some operation that releases eye watering odors.

This CAFO, started at 4,300 cows 3 years ago, doubled to 8,600 cows the next year, with the DNR's blessing, and rumor has it they are trying to expand again.  They own about 3,000 acres and have agreements with area farmers who take the excess manure to fertilize their fields. About 12 manure tanker trucks are lined up to truck the manure to area farms every other week.  The traffic from the tankers, farm equipment and other farm activity is constant. It’s ruined our roads and changed the nature of our formerly quiet, peaceful community. I own a simple home on a few acres. I’ve had to lower my pump 20 feet and still have issues pumping. My property values have dropped over 3 % each of the last three years. Flies and bugs have increased at least a third since the farm began. I’m trying to adjust to the noise of the pumps which start up at 2:00 A.M.

I feel sorry for those of you in the path of this proposed CAFO.  I wish my community had organized to fight this.  I just don’t know what to do to get my life back at this point. Who do I call to fix this?
Posted by MAL at 9:58:00 AM