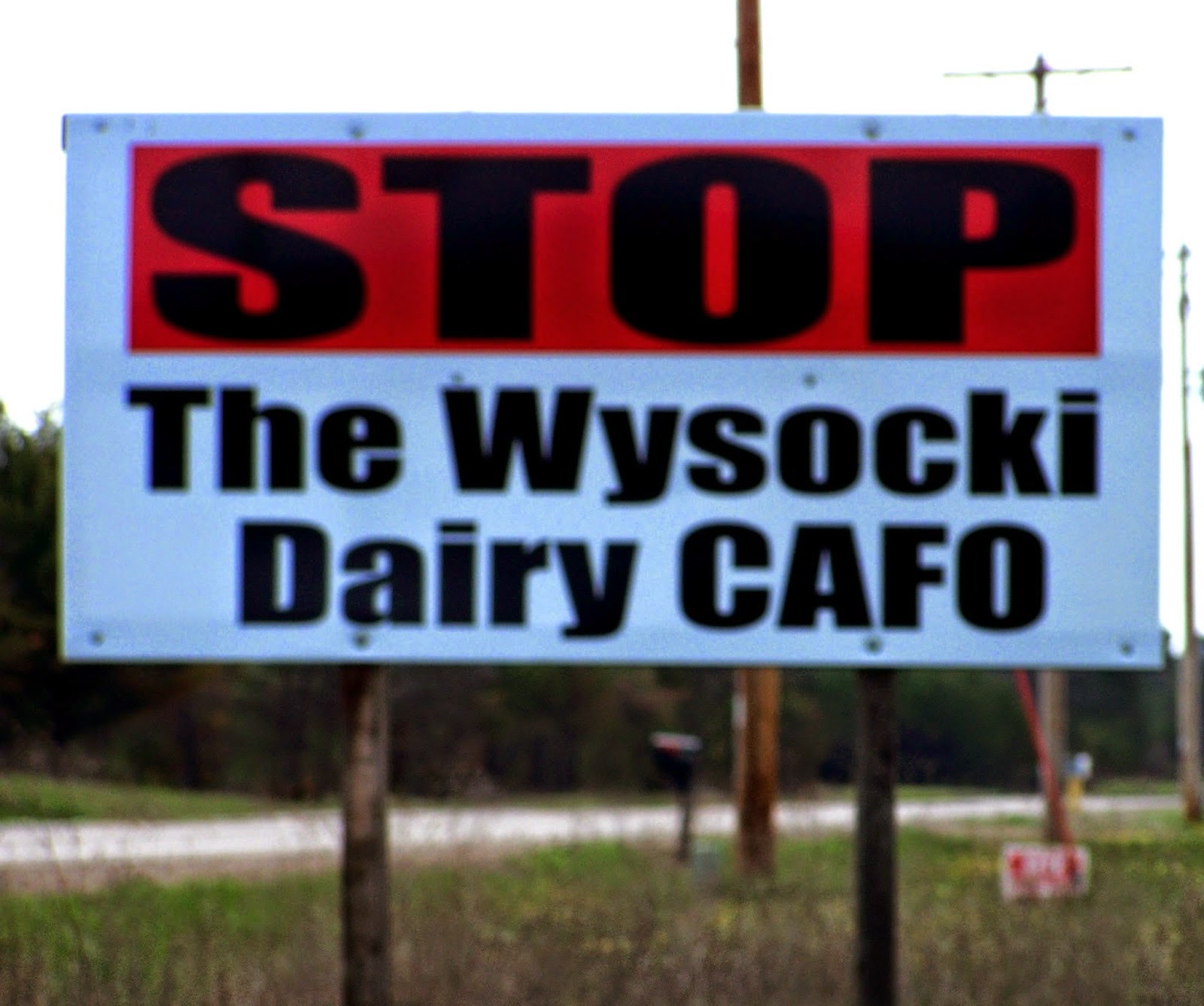 Update: "The Wysockies quietly buy up land, use it up, literally poison their neighbors, the hell with everyone else. These people do not live on the CAFOs; they live far-away. And, yes, there is something sociopathic about this."
—Saratoga, Wisconsin resident
---
The Wysocki Family of Companies are the Koch brothers of factory farms of a particularly destructive variety—creating concentrated agricultural feeding operations (CAFO), as noted by the citizens group, Protect Wood County.

CAFOs are cruel factories, locking cows in a box and spreading the tons of cow manure over surrounding waters, air and land by using massive quantities of water from water wells and then sending the water back into the environment laden with toxins.

"In a CAFO, animals are crammed by the thousands or tens of thousands, often unable to breathe fresh air, see the light of day, walk outside, peck at a plants or insects, scratch the earth, or eat a blade of grass," notes CAFO: The Tragedy of Industrial Animal Factories.

The Wysocki family doesn't live near or on the grounds of the operations (several members live far away in gated communities, other company officials are spread out over Wisconsin nowhere near these cesspools), safely removed from the "50 million gallons of liquid waste per year," that would be produced by the proposed CAFO. (Rearjet, Wisconsin Rapids-Tribune, May 6, 2014)

Following the Wysocki corporation announcing in 2012 it would build a massive CAFO, "Republican state lawmakers" moved to assist the corporation in obtaining permits for 49 high-capacity water wells in the central sands of Wisconsin for Wysocki, of which University of Wisconsin-Madison hydrogeologist, George Kraft said, "seriously, we may dry up every lake and stream in the Central Sands." (Johnson, WPR)

This is terrible news for several counties—including Wood, Juneau, Portage and Adams—and the families and small businesses that include tourism (and all the supporting businesses), small tree farms, vacation homes, and various other enterprises that settled in the Golden Sands area of Wisconsin.

Following news that beginning next week, "Wisconsin residents can no longer challenge state Department of Natural Resources (DNR) permits for a high-capacity well if state officials failed to look at what the well might do to overall groundwater in the area," (Quirmbach, WPR) there is increasing realization Scot Walker and his new DNR (Destroying Natural Resources) may make the beautiful Golden Sands region a memory like a polluted lake where once children fished and swam.

The Wysocki corporation didn't ask residents or area businesses for approval or even offer to listen to well-grounded, scientifically backed health and environmental concerns.

What it did do sue the Town of Saratoga in Wood County for challenging the corporation's right to befoul the area waters. (Rearjet, Wisconsin Rapids-Tribune, May 6, 2014)

Residents and area businesses are gearing up for a fight against the Wysockis, Scott Walker, and Rep. Scott Krug (R-Wisconsin Rapids and ALEC).

May not seem like a fair fight, and it's already getting nasty, but not as nasty as the 150 pathogens found in cow manure, including antibiotic resistant bacteria.

As several long-time residents have pointed out, if you had a vacation home or a place to go for summer tourism, how close would you want to get to waters and land befouled by "liquid cow shit?"

I asked Nancy Koch of Protect Wood County if she has been in touch with elected politicians.

Koch said she is getting the brush-off from the Walker administration and the administration of the DNR. Local officials have been very supportive. And Mary Burke's campaign has been in touch and is described as sympathetic and supportive of Protect Wood County, Koch said.

It's looks like befouling the golden sands of Wisconsin is going to be a highly-charged political issue fairly soon after Independence Day.

The Wysocki Family and Big Ag have contributed over $700,000 to Scott Walker's gubernatorial campaigns since April 2011, according to an analysis of data from the Wisconsin Democracy Campaign.

Wysocki family members alone have given well into the $1,000s to Walker and remain heavy Walker political backers.
Posted by MAL at 6:35:00 PM