The GOP's War on Marriage and the 14th Amendment 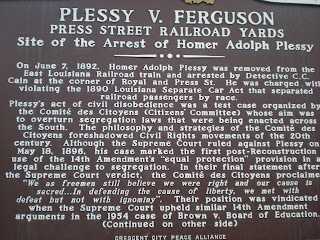 Equal protection and due process—we have come a long way, baby but 14th Amendment cases involving marriage rights is one battle of a wider war launched by the GOP and judges such as Antonin Scalia against the 14th Amendment.

"The Constitution protects the choice of one’s partner for all citizens, regardless of their sexual identity," U.S. District Judge Robert J. Shelby writes in his 53-page opinion. Utah is blazing a path for Australia, India and Russia.

Judge Shelby writes: ''The court holds that Utah's prohibition on same-sex marriage conflicts with the United States Constitution's guarantees of equal protection and due process under the law. The state's current laws deny its gay and lesbian citizens their fundamental right to marry and, in so doing, demean the dignity of these same-sex couples for no rational reason,'' reports Erik Eckholm and John Schwartz in the New York Times.


From beginning to end of Shelby's opinion Friday, in four different citations scattered throughout, he favorably cited Scalia's dissent, buttressing his legal analysis with Scalia's warnings.

In its 5-4 decision in June, the Supreme Court held that the federal Defense of Marriage Act was unconstitutional because it violated individual liberty, but did not rule that all state bans on gay marriage were unconstitutional. In his dissent in the case, United States v. Windsor, Scalia wrote that the majority opinion's logic would inevitably lead to the state bans being declared unconstitutional ... .

Consider also Scalia's dissent in Lawrence v. Texas (2003): "Today’s opinion is the product of a Court, which is the product of a law-profession culture, that has largely signed on to the so-called homosexual agenda (sic), by which I mean the agenda promoted by some homosexual activists directed at eliminating the moral opprobrium that has traditionally attached to homosexual conduct. ... One of the most revealing statements in today’s opinion is the Court’s grim warning that the criminalization of homosexual conduct is 'an invitation to subject homosexual persons to discrimination both in the public and in the private spheres.'"

How ghastly, criminalization that is.

Moral opprobrium is indeed an evolving concept now attaching to jurisprudence, as Justice Scalia may not have anticipated.

Seventy percent of American cannot legally marry. There are 76 Countries where anti-gay laws are as bad as or worse than Russia’s. Mauritania is one of four African countries where same-sex relations between men can result in the death penalty. Homosexuality is illegal in 41 out of 53 Commonwealth countries.

As the Toronto Globe and Mail writes, "The global struggle for sexual justice for all has come extraordinarily far in a short time, but it's far from over. "(Robert Leckey. December 13, 2013)

Not just Judge Shelby and Scalia has taken to effectively using Scalia at Scalia expense.


Consider Scalia in Lawrence v. Texas (2003), in his own bizarre dissent:


Consider Laurence H. Tribe's piece on Hollingworth v. Perry (2013). Tribe writes: "But Justice Scalia – in a portion of his dissent that Chief Justice Roberts conspicuously declined to join – couldn’t resist the temptation to use the occasion to insult the Court’s majority, and Justice Kennedy in particular, in essentially ad hominem (and ad feminem) terms. I write this comment principally to highlight the extraordinary character of this particularly vitriolic and internally inconsistent dissent." (Tribe. DOMA, Prop 8, and Justice Scalia’s intemperate dissent. June 26th; SCOTUSBlog)

More than 30 states, including Wisconsin, have passed amendments or laws restricting marriage to a man and a woman.

And Scalia would be only to happy to follow his Party as it blasts away at gays, blacks, Latinos and whichever group the Republicans can find to blame for America's challenges.
Posted by MAL at 8:46:00 PM