Wisconsin Families: Massive Rally in Madison, Across State All Weekend 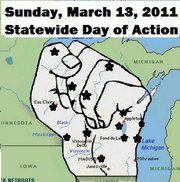 Just a reminder to join over 100,000 at the Capitol Square Saturday and Sunday, downtown Madison for a massive protest against Governor Walker's attacks on Wisconsin's middle class.

There's a tractorcade featuring Wisconsin's working farmers from 10a - 11a, followed by the massive demonstration at 2pm.

Weather forecast: Winds at 20 to 30 mph, occasionally gust over 40 mph. Temp in the 30s. It will be cold among the lakes and warm in our hearts.

We believe in local control and working families, no matter what the Koch brothers, Walker, Hopper and holy FitzWalkerstan think serves the billionaires best. 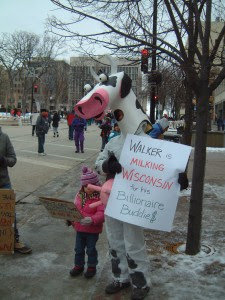 Pubilus No 9 reports: "Events are being scheduled for all day long Saturday. Starting at 8am, citizens with the group People Organizing Wisconsin for Education and workers’ Rights (P.O.W.E.R.) will be walking from Milwaukee to Madison in 3 shifts, arriving in Madison on Sunday at about 2pm. Check out the route for further details." ...

From noon to 3pm there's the "March on the Capitol" rally held by the AFT-Wisconsin union at the Martin Luther King, Jr. Blvd. entrance.

Starting at 1pm, you can run around the Capitol square as part of the "Run, Dems, Run!" protest run of 14 laps. They say this is 8 miles! But of course you don't have to run the entire 14 laps. The run starts at the State Street corner
Posted by MAL at 6:48:00 AM