Walker Supported Transportation Bill That He Hits Neumann on in New Ad; Even Wrote Letter to Editor 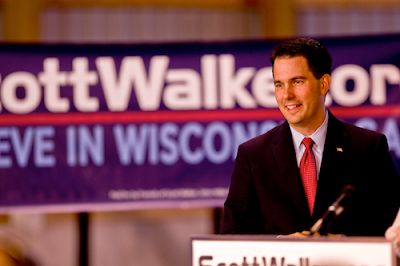 Now, this is fun. Scott Walker caught again in a blatantly hypocritical position.

You read it before: Walker is too slick by half. What a blunder to make on a last-minute attack ad.

Take a closer look at Scott Walker via the Mark Neumann campaign:

WAUKESHA, Wis. - September 8, 2010 - A newspaper article and letter to the editor reveal that Scott Walker supported the transportation bill that he now attacks Mark Neumann for voting in favor of back in 1998.

The bill is at the heart of Walker's last-minute, negative attack ads on TV, radio and direct mail which attempt to link Neumann to Nancy Pelosi for voting to support the same transportation bill that Walker himself supported.

"Scott Walker is attempting to smear Mark Neumann's record as a true fiscal conservative with a desperate, negative attack campaign attempting to link Neumann to Nancy Pelosi," Neumann campaign manager Chip Englander said. "Yet, Scott Walker supported this bill as well. He said it would 'save Milwaukee County taxpayers money.'"

"What Walker calls pork today, in 1998 he said would save money."

And the state legislators agreed, in a letter saying, "We believe the taxpayers of Milwaukee County will benefit from not being forced to use these transportation funds on a light rail system that would cost hundreds of millions of dollars, or on (special) lanes that would tear up residential and commercial property in Milwaukee County."

The six state legislators, led by Rep. Scott Walker (R-Wauwatosa), said the money would be best spent on such projects as reconstruction of the Marquette Interchange and the Zoo Interchange, and increased support of the Milwaukee County Transit System.

. . . Originally, $241 million of federal funds was set aside for use on the East-West Corridor. Specifically, the money could be used for a light rail system along the corridor or for the widening of I-94 to insert car pool and bus lanes…

In our opinion, supporting these projects is a better use of the funds and will ultimately save Milwaukee County taxpayers money.

Please click here to read the articles in their entirety: