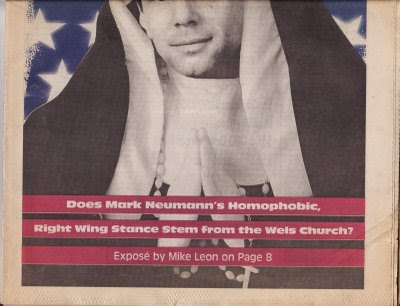 A Madison politico (a columnist for Isthmus magazine now) some 10 years ago objected to a piece I had written for In Step newspaper, a civil rights LGBT paper that was published out of Milwaukee [issue pictured above].

His objection was that the piece explores the extremism of then U.S. Senate candidate Mark Neumann and Neumann's church, the Wisconsin Evangelical Lutheran Synod (WELS) that instructs its members in explicitly anti-Catholic, anti-Semitic and anti-gay teachings.
And to this politico, a politician's church is off-limits. He's wrong.
A reader brings to our attention more insight on Neumann's political decision-making process that is in Neumann's own words directly guided by his religion that micromanages its members' lives.
Heartland Hollar has a piece out this week, Neumann the One, linking to an interview with Christian Life Resources, a religious organization that "subjects itself to the doctrine and practice of the Wisconsin Evangelical Lutheran Synod."
And as the Christian Life Resources interview and another interview, Faith in the Political Arena, make clear, it is Neumann who makes his religion the public basis upon which he seeks and holds public office, specifically citing scripture text as interpreted by his church. So we're supposed to ignore it?
That said, Neumann is smart, driven, well-spoken and has the money to knock the socks off any GOP opponent, and though his religion is a political problem [what Catholic wants to hear that a U.S. Senate candidate thinks the Pope is the anti-Christ), look for Neumann to put up one hell of a fight for the GOP nomination
---
Christian Life Resources Interview
- Clearly Caring Magazine, Sept/Oct 2008, Vol. 28, No. 5
Will you run for office again?
The words of James 4:13-17 are useful tools in planning my life. If it is the Lord's will I would consider it a privilege to run for office again and serve the people if elected.
Was there any portion of God's Word that you leaned on while serving in public office?
The most worn page of my Bible referenced Matthew 6:25-34 where Jesus tells us not to worry. James 1:2-7 also reminded me that trials lead to maturity and that wisdom will be provided to those who do not doubt.
---
Asked how he made his decisions in Congress in an interview with the WELS Communication Services Director, Neumann replied, "What we did in our office, and Sue (wife) helped me a lot with this, we established a checklist, so to speak, on any bill that would come before us. And we'd ask ourselves first, 'Is there a moral or ethical reason to a cast a vote in any particular way.' And if there was, it didn't' matter what anybody else said to me, we were going with the morals and ethics first."
See also:
Mark Neumann in His Own Words
Mark Neumann: The Mean Machine
Mark Neumann for Gov. - Please Jesus, Yes!
Posted by MAL at 2:10:00 PM