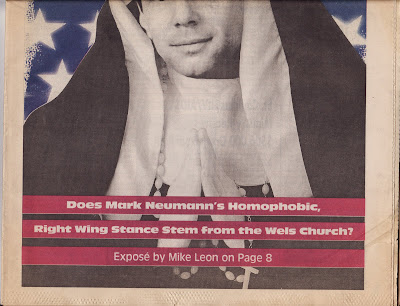 Jim Klauser is a very smart GOP operative advocating that Mark Neumann throw his hat into the ring against Jim Doyle in 2010.

Writes Klauser in his open letter in WisPolitics:

Mark Neumann, a former Congressman who nearly defeated Russ Feingold [in 1998], is a potential candidate. Mark is a successful business man from Waukesha County (a growing county). He and his family are involved in choice and charter school reforms. He is involved in his community and church. While a Congressman, Mark worked with Speaker Newt Gingrich to develop a no tax increase alternative to Bill Clinton’s spend, spend, and spend. ... I have concluded that of the prospective candidates, Mark Neumann is best able to win and govern well. I encourage you to consider Mark Neumann for Governor.

Neumann is independently wealthy and did fight against Clinton and those huge budget deficits [oh, wait Clinton had giant budget surpluses, and was on a path to zero national debt]. Nevermind, Cheney proved facts don't matter and Wisconsin does not want Scott Walker getting killed in 20 months. And people in Wisconsin love Newt Gingrich.

Neumann's problem is that he is a rabidly anti-gay, rightwing extremist with a long record of hateful ideological baggage that would make George W. Bush blush.

In a widely reported address to the La Crosse Christian Coalition in 1997, Neumann said that he would not hire a person who applied for a position in his legislative office after stating a gay or lesbian orientation.

“If somebody walks in to me and say, ‘I’m a gay person; I want a job in your office.’ I would say, ‘that’s inappropriate’ and they wouldn’t be hired because that would mean they are promoting their agenda. The gay and lesbian lifestyle (is) unacceptable, lest there be any question about that.”

In a March 9, 1997 address to the Madison Wisconsin Evangelical Lutheran Synod (WELS) church [preaches no abortion even in cases of rape, women need to submit to men and gays are to spend eternity in hell], Neumann said his political advisers warned him not to mention his religion in his 1998 run for the Senate against Sen. Russ Feingold who is also up for reelection in 2010.

“When I first ran I had all kinds of consultants telling me not to mention religion. They told me to tone down any discussion we might have. … they did ask me to tone down the concept of religion or values that are taught in our churches and synagogues as being a part of what we were,” said Neumann.

I think Klauser is thinking that Scott Walker would wash out, and Neumann has lots of money and just might be crazy enough to run.

Did you know that Jim Doyle has proposed a statewide domestic partner registry, is an elitist (went to Harvard Law School and was in the Peace Corp) and that he talks to gay people, like all the time.

Mr. Neumann, Jesus wants you to run. Just remember that Satan is closer than the shirt on your own body, to paraphrase Martin Luther’s admonition about the proximity of the Devil. And in Wisconsin politics this intimacy with the Devil emanates from another fallen man with five letters in his name: D-o-y-l-e.

And I think he's Catholic.