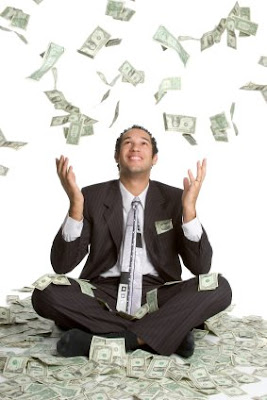 Can you believe this? Sick.

Merrill Lynch, with CEO John Thain presiding, paid fifteen billion dollars in bonuses in December with public money. This news is sure to be iconic.

The news that Merrill Lynch paid out $15 billion in bonuses is sure to ignite new questions about the wisdom of bailing out Wall Street. Merrill Lynch took $10 billion from the TARP, allegedly to fill holes in its balance sheet. But instead of using that to repair its financial health, it simply put the money into the pockets of its employees. There is no way to defend this disgusting payout.

But that won’t stop Bank of America, which now owns Merrill, from
defending the bonuses. And across Wall Street there are lots of people who actually believe that Merrill did the right thing.

How can so many smart people be so dumb?

There is a sick psychology of entitlement on Wall Street that was created during the bubble years. Many simply cannot believe that they do not deserve huge pay packages. Their brains have (not) caught up with the idea that they are working in broken institutions that would
be unable to pay to keep the lights on if not for the fact that Washington has given them billions of taxpayer dollars.
Click 'More' to view the rest of this post.» More

Remember the latest Bank of America (BAC) bailout, the one we were all so steamed about last week? (The $20 billion of cash and $100+ billion of trash-asset guarantees that absolutely had to be given or else Bank of America shareholders might have lost everything?)

Yes, well, you probably thought that that cash would be used to bolster the bank's capital or something. (We know you weren't dumb enough to think it might have been used to make loans).

Alas, it wasn't used for that. It was used to pay Merrill Lynch executives the huge bonuses they deserved for unloading their balance sheet on for-some-reason-not-yet-fired Bank of America CEO Ken Lewis.*

*BOFA will say that the cash used to pay the bonuses was not the actual cash received from taxpayers. Please. Cash is cash. What BOFA and Merrill are already saying in their defense is that the bonuses were accrued (and mostly paid) all year and that Merrill just shelled out the last $4 billion in December...a month before the latest bailout funds arrived.

From a political perspective, Obama can propose and pass just about any regulatory framework to hold these guys accountable.
This is the 911 of Wall Street greed. CEO John Thain, this is the *$^&* who will make Enron's Kenneth Lay look like Jesus Christ.
Posted by MAL at 8:35:00 AM