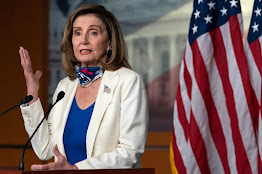 Madison, Wisconsin — Nancy Pelosi did it, or at least she says she did it calling a COVID 19 bill by Election Day unlikely.

Nancy blew the stimulus deal, as was widely predicted after her unhinged interview with CNN's Wolf Blitzer.

As America is poised to enter another Great Depression, the House Democrat says no stimulus deal is likely because the Democratic Committee chairs did not get what they want in White House-House negotiations, nor were the House Chairs shown "respect," in Pelosi's estimation.

Here is a passage from the Wolf Blitzer-Nacy Pelosi interview last week illustrating how out-of-touch Nancy Pelosi is:

WOLF BLITZER: Let me read a line from the letter you wrote. 'The President only wants his name on the check to go out before Election Day and for the market to go up.' Is that what this is all about, not allow the President to take credit if there's a deal that will help millions of Americans right now?

If the plural of anecdote is not data, yes, there's some people who said this or that, overwhelmingly, my caucus wants, what is right for the American people. Overwhelmingly, our chairman who wrote the bill, read their statements, they'll put out their own statements, when they saw what the White House was proposing. So do a service to the issue, and have some level of respect for the people who have worked on these issues, written the bill to begin with. (emphasis added)

There you have it: Both political parties do not give a damn about the people.